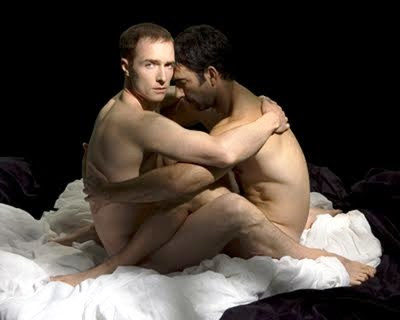 This film has received mixed reviews.  Some think it corny and contrived.  Others disagree.  I liked it.  It is stark (filmed on a stage), it is simple (only two actors), and it is without question a fantasy; but it is a love story that delves beneath the veneer of everyday life and romance to examine the unseen “matrix” of life that gives it meaning. It makes you feel good as well as spiritually (small “s”) stimulated, and a movie that does that can’t be all bad.

In the words of the producer, Stagewright Films, “physical attractions appear to be the obvious explanation for two people to become a pair. But are they really the reflection of something sublime, everlasting or dare we say, spiritual? Do relationships start in the bedroom or in the heart? In this male love story, the bliss described by Joseph Campbell and sages throughout the millennia is a practical option for finding happiness. As the camera delves into the character's minds and actions we find fulfillment on both a physical and spiritual level.”

The film is the screen adaptation of the play by the same name, but we might as well be watching a film of the play. All the action takes place on one stage. One might wonder about that, but for this story, it works.

The movie opens with (gay) Guy sitting down on a park bench near a construction site to read Plato.  He is joined by (straight) hunky construction worker Doug, who engages a reluctant Guy in a conversation that rather quickly leads to a discussion of Doug’s desire to get “head.” He assumes that since Guy is gay, he would gladly comply.  Guy resists at first, then eventually agrees, intrigued by this man who appears to be a complete opposite. 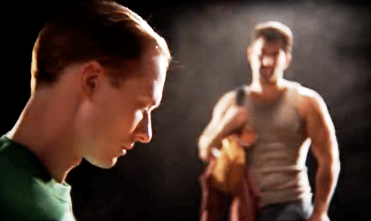 The film develops the relationship between the two from there. The title of the movie comes from a saying that Guy uses as a mantra to control his passions. In the opening scene with Doug, he explains that Plato and other philosophers maintained that we were once one perfect being, which then broke into pieces like a jigsaw puzzle; this life is about the pieces of that puzzle fitting themselves back together.

We are attracted, Guy says, to things that remind us of when we were the one perfect being. What we are, is love, and we spend much of our lives looking for something we already have. To avoid getting hung up on what attracts us, Guy explains, we “just say love.” Later, as Guy grows increasingly romantically attached to the apparently straight Doug, he often repeats this mantra, with increasing exasperation and decreasing utility.

Later in the movie, Guy explains, “We all have the same problem: loneliness. Of course, we’re not alone, but we forget. Every now and then, someone comes along and reminds us; that’s attraction … Desires are longing to feel a connection we already have, but have forgotten. Our real purpose in life is to remind each other, by example, of who we really are.” 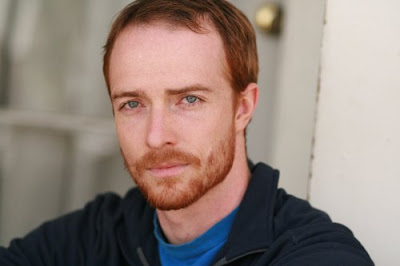 There are some twists in the plot that develop these themes, which are the subtext for the developing relationship between Guy and Doug.  As you can tell from the lead picture, they eventually make love (in an exquisitely filmed and acted scene), revealing to Doug his true identity. Later, referring to the change that came over him after this, Doug tells Guy, “You let me breathe. Before I met you, I didn’t know how to breathe.” The first time I heard him say those words, I sighed. I’m not afraid to admit it.

To say more would reveal too much of the plot.  Most reviewers agree that the strongest aspect of the film is the acting of both Matthew Jaeger (Guy) (pictured above) and Robert Mammama (Doug). As one reviewer wrote, “they didn’t just learn their lines; they lived their parts.”

If you are looking for a romantic movie to watch for Valentine’s Day, this would be a good choice.
Posted by Invictus Pilgrim at 5:05 AM 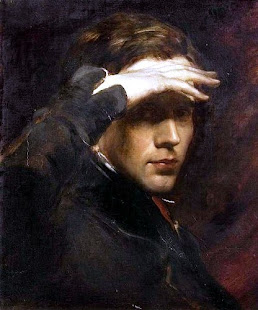